What’s Difference Between Shotguns vs Rifles and Who Should Use Which? - Daily Shooting | Shooting Tips And Reviews
2 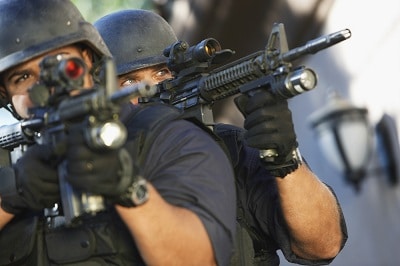 What’s Difference Between Shotguns vs Rifles and Who Should Use Which?

To someone new to hunting or firearms, it can be a difficult to decision to choose between a shotgun and a rifle.

In this article, we will go over the pros and cons of each, and make recommendations for when each one is better.

Before starting, we will go over some shotgun and rifle basics.

Shotguns are firearms that shoot shells rather than the traditional cartridge.

Shells are loaded into the shotgun, and are either automatically or manually (pump style) cycled through after shooting the shotgun.

Shotguns traditionally fire “shot,” which is a higher quantity of smaller projectiles, but can also fire a slug. Slugs are one larger projectile, and essentially make the shotgun a basic rifle.

The Pros and Cons of Shotguns

The pros of a shotgun are the versatility, legality, and slug size.

Shotguns are some of the most versatile weapons. With very few changes, you can hunt birds and big game with the exact same weapon. weapon used has a significant impact on the range

By changing the shell used, you are able to do many different types of hunting with a shotgun.

In some places, you are not able to hunt with a rifle. In this situation, a shotgun shooting a slug is an excellent choice to be able to hunt.

Similarly, a slug that is shot from a shotgun is generally much larger and heavier than traditional rifle projectile.

As a result, a shotgun shooting slugs is much deadlier.

The cons of a shotgun are the accuracy and the range.

When a shotgun is used to shoot slugs, it is not nearly as accurate as a high quality rifle.

While scopes can be mounted on a shotgun, the accuracy is still limited.

There are shotguns available specifically for slugs with a rifled barrel, but this limits the shotgun to only shooting slugs.

Similarly, the range is limited to 75-100 yards, while high quality rifles can easily shoot out to 300+ yards.

While there are countless different types of rifles, they all function basically the same.

Rifles fire a traditional cartridge, which has a projectile located above a propellant filled casing. Rifles fire this projectile downrange at extremely high rates of speed. There are many different cartridge sizes available.

The Pros and Cons of the Rifle

The pros of a rifle are the range, accuracy, and the available options. As previously mentioned, many modern rifles can accurately shoot out to 300+ yards.

When paired with modern optics, shooting to 300 yards is not even a stretch for the experienced marksman.

Due to the rifling in the barrel, rifle projectiles are able to travel much further and much more accurately.

With modern rifles, there are many options available. There are seemingly endless cartridge sizes and ammunition types.

Choosing the exact cartridge size you would like to shoot and pairing it with a hand chosen ammunition will help to ensure your exact needs are met.

However, even with the multiple cartridge and ammunition possibilities, rifles are still extremely limited compared to shotguns.

If you are having an ar15, you should choose the best optic for your AR-15.

The cons of a rifle are its limited uses and potential legality issues.

Despite the fact that there are so many cartridges available, once you select your rifle, that specific cartridge is all that the weapon will be able to shoot.

With a shotgun, you can shoot multiple different loads of shot as well as slugs.

The other con, as previously mentioned, is that in some areas it is not legal to hunt with a rifle.

Why would a hunter choose to use a shotgun with slugs instead of a rifle?

First, there are some places where it’s illegal to hunt with a rifle.

In areas like this, hunting with a slug gun is absolutely necessary. However, there are other reasons to use a shotgun slug instead of a rifle as well.

If you hunt in an area with a lot of brush, a slug will travel through brush much better than a rifle bullet. Similarly, due to the stopping power, if you’re shooting within 100 yards, a shotgun is a better choice.

Shotgun slugs and rifle bullets are similar in some regards, but different in others.

On one hand, they are both largely used for hunting deer and other larger animals. However, there are some key differences. Right off the bat, the biggest difference is the size.

Shotgun slugs commonly weigh about an ounce (437.5 grains), while rifle bullets are usually closer to 150 grains, dependent on the size.

Slugs are also significantly wider, at .69 inches in diameter, compared to rifle bullets which are commonly half that diameter or less.

As you can imagine, the significantly increased size and weight of the slug can be extremely devastating. A well placed shot with a slug will stop a deer dead in its tracks.

As you can see, both rifles and shotguns serve specific purposes.

While there are definitely circumstances where one is better than the other, they are both very useful weapons.

Shotguns are some of the most versatile firearms out there, and modern rifles have come a long way in terms of effective range and accuracy.

All said, decide what you need your firearm to do, and decide from there whether a shotgun or a rifle better suits your needs.