Shot Size for Ducks: Which to Use for Hunting - Daily Shooting | Shooting Tips And Reviews
1 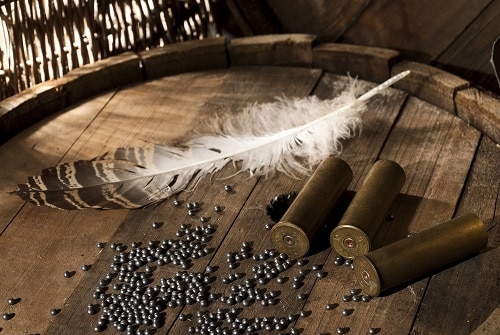 Shot Size for Ducks: Which to Use for Hunting

When hunting any animal, it is important to use proper shot size. That is because you don’t want the meat ruin from using too large of a round.

In this article, we will look at hunting waterfowl and discuss the proper shot size for when you are hunting duck.

Read on to learn all you need to know when it comes to selecting the right size round to use the next time you hunt ducks so you can bag a nice one and possibly have it mounted.

What does shot size mean?

Before getting into the details of how to pick the proper shot size when hunting duck we will look at what is meant by shot size.

Well, shot size is generally given as a number, and the number indicates how big each pellet or bb is in each shell or round.

The bigger number rounds when it comes to shot size are actually the smaller rounds, and the larger numbers are the bigger rounds.

This means that a shot size of 6 which is .110 is smaller than a shot size of 2 which measures slightly bigger at .180 but even though it is only a slight difference size wise, it can make a big difference when hunting because of the force behind them and the pattern it gives.

Rifle with the best ar10 scope is good choice for duck hunting too.

How to pick around?

So, now that you know what the number means when it comes to shot size and that the larger numbers are smaller rounds, how do you pick the right size shot size for your needs? Well, wisdom says that you should only use a round that is big enough to kill the animal you are hunting and not to use anything bigger than that. That is because once you have something big enough and enough force to kill the target, you are not gaining anything by going to a bigger round.

There is actually a chance to cause more harm. That is because you want the impact wound on the animal to be as small as possible because generally, the meat that the bullet goes through is not edible. Also, you don’t want the target torn to pieces because then you can’t display it if you are hunting for that purpose. So, what are some recommended shot sizes for ducks then? Well, the answer depends on the size of duck you are hunting, but read on to find out some suggestions for varying sizes of ducks.

Small ducks include species such as teal. For small ducks, you don’t need that big of the round at all. That is because they are small and they have less meat for your round to penetrate before it gets to an important organ to be able to kill them. No. 6’s is a great round size. This is because smaller ducks fly fast and you need to be able to hit them. With these loads, you get wider denser patterns that make it easier to hit the smaller faster ducks.

Also, these size shells are commonly used and readily available making them affordable which is always nice. Another benefit to these size rounds is since the pellets are small there is less recoil meaning you can fire faster and also have less wear on you after a long day of shooting because with smaller ducks you will need to kill more to get the same amount of meat as with a larger duck if you are hunting for dinner.

Medium ducks are ducks such as Gadwalls, Wood Ducks, Wigeon, and Scaup. For these, you need slightly larger rounds because they are bigger and have thicker tissue than smaller ducks. The best round size to use for medium ducks is No. 4’s that is because they are big enough to put the medium duck down, but not too big to damage the bird. Actually, number fours are a great all-around round to use especially if you are hunting a variety of species of duck. That is because they can be used on teal and work out fine most of the time.

No. 4’s can also be used on mallards and bring them down as well. Size 4 rounds are fast enough to for the teal and work even better on the slightly slower medium ducks. The patterns they give work out well and if you are only going to take one round size with you when duck hunting it should probably be a number 4.

Last we have the large ducks which are most commonly your mallards but can also include canvasbacks, Small Sea Ducks, and Small Geese. For these larger ducks to be most effective, it is when you should start bringing in the bigger rounds. For best results No. 2’s work great. That is because these large ducks are slower and have a lot more muscle and tissue than their smaller family. This makes it, so you need larger rounds and more force to bring them down.

Not only is shot size important, but also the pattern is important like we have already mentioned. It is important to get used to the pattern that the round is going to have in your gun before hunting and to see how well it strings. This can be done at a range and should be down when trying new rounds because even though the pellets might be the same size, different brands of a round can pattern differently.

Does, the gauge of round matter or just the size? The gauge matters to some extent because if you are using a weaker load, then you will need a larger pellet. These recommendations are all based on using a 12 gauge shotgun. Twelve gauge works great for ducks because it doesn’t have too much power, but it isn’t too weak either. It has the perfect balance of force and works the best for each size of duck for the size of round specified.

So, now you know how to pick what size round for duck hunting. You know that for small ducks you can use No 6’s and for large ducks No 2’s and that No 4’s work best for medium ducks. However, you also learn that most of the time number four is the sweet spot and if you are only going to carry one size round with you that is the best because it can bring down a larger duck if they land right, but will also not destroy smaller ducks if used to kill them. Now that you know all this you can head out to the range and shoot some clay ducks to get the patterning right for the rounds you are using for the next time you go duck hunting.