The Hunter’s Handbook: All You Need to Know About Pregnant Deer - Daily Shooting | Shooting Tips And Reviews
2 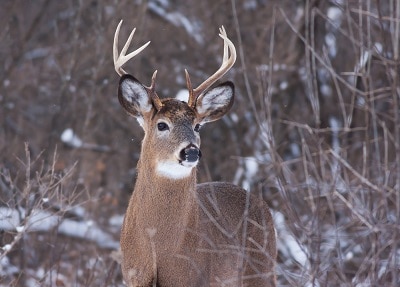 The Hunter’s Handbook: All You Need to Know About Pregnant Deer

Some people may have concerns about accidentally hunting pregnant deer. The good news is, U.S. deer hunting seasons are set up around the rut, to avoid having pregnant deer in the firing line. But, if you want to learn more about them, we’ve got you covered!

Deer are seasonal breeders and you can use the deer rutting season as your guide to avoid the problem of ever hunting a pregnant one. All six phases of rut are important parts of the deer reproductive cycle, but they are the best time to take deer without interrupting a successful breeding season. That is, allowing does to deliver fawns.

Understanding more about hunting, and how and why hunting seasons, and bag limits, were created is helpful to all hunters, so we’re going to cover a bit of that first.

A Super-Fast History of How Deer Seasons Came to Be

Once upon a time, many people took pregnant animals, because they were hunting all year round to keep their family’s fed. Deer conservation wasn’t even considered, because they were so plentiful. People have been hunting, after all, for a very long time.

German artifacts, as well as the cave paintings in France, show that deer hunting has been around even before the dawn of modern civilization. And, let’s face it, you cannot talk about American history without taking into account the role of hunting, both good and bad.

Early Native Americans used hunting as a rite of passage for men. It proved that the man was capable of feeding his family. For the Pilgrims of Plymouth, deer, and any other game were considered the property of landowning nobility when they lived in Britain.

The right to hunt was denied to the common man there. You can only imagine their delight when they found out that deer were plentiful in America. There were so many in fact, that as the populations of humans increased, there was a bit of a problem.

In the 20th century, deer populations threatened forest growth and farms. To make matters worse, there was an increase of Lyme disease in humans where their numbers were high. That was due to deer and the common deer tick, which carries the disease.

By the second half of the 20th century, unrestricted deer hunting resulted in depleted herds. So, responsible hunters came up with a mandate to manage deer populations, so they don’t stress ecosystems. They also placed strict regulations against the hunting of pregnant deer.

Most hunters at this point in time consider themselves stewards of the land, and animals populations. Conservationists at heart, they want land, water, and animal resources to be well cared for and balanced — preserved for the next generation to practice the same natural, sustainable method of feeding their families.

Apart from this treasured hunting tradition, there are other numerous advantages of deer hunting that include:

None of those advantages are possible if we don’t preserve deer herds. The way that we do that is set up hunting seasons, and to make sure that those seasons correspond to the rut – not during gestation.

What Is the Deer Rutting Season?

The rut is the best time of the year for any seasoned deer hunter. Bucks are usually on the chase for does, and they come out in the open fields during the day. They’re easier to draw to you with estrus scents, buck grunts, antler rattling, and doe in heat bleats.

The rutting season runs between mid-October and early December. When you spot a doe during this time, it’s a clear indication that a buck could be nearby.

How is rutting determined?

There are different theories out there on how you can predict the rut. From moon phases, temperature triggers and daylength.

Studies have dispelled any notions that the moon affects the rut. The rut will also happen regardless of weather conditions such as rainfall because deer get bred at the same time each year. Weather conditions only affect daylight deer movement, which is crucial information for hunters.

The theory of the photoperiod is the most widely proven theory for predicting the rut. It states that daylight length is what drives deer to breed. This happens within a specifically limited window in order to give the fawns the best chance of survival.

The Different Phases of the Rut

Deer display unique behavior during the six phases of the rut. You should use different hunting strategies to your advantage for every phase, of course. We’re going to briefly cover each phase.

The pre-rut phase takes place from mid to late October. At this stage, bucks begin to exhibit rutting behavior, and you’ll likely find rubs and scrapes on tree trunks as well as digging shallow pits.

The best hunting strategy for this period is to find where the bucks are bedding. You can use the scrapes to narrow down the bedding area. Do not use calls during this phase because it will just scare them away.

The seeking phase takes place between late October to the first week of November. Bucks start to try to find the location of does, and rut signs will be more prevalent. Mature bucks will begin walking in broad daylight while younger bucks go chasing females.

Hunting in the mornings can become more effective — especially around the bedding area. Using calls could work, but you should hold off until the chasing phase.

Chasing begins when a buck finds the doe in estrus. As it approaches, the does run but still remain in sight. The buck follows her in pursuit, but little actual mating happens because every buck is just in pursuit.

During this peak rutting stage, the bucks will be less cautious, making them vulnerable to hunting. Bucks will use their antlers to fight for mating rights over does. Their high level of distraction is an advantage, giving you a better chance at a clean shot. You can track trails at food sources and open areas. Grunt calls and decoys will also be effective.

The tending phase is also called the lockdown stage. It takes place from mid to late November. Hunting at this stage is tough because most breeding happens in thick vegetation cover.

However, a strategic blind near bedding areas can offer a shot when the buck slips up and breaks cover.

Using doe bleat calls can also be effective as most bucks can still be lured into going after another doe.

The post-rut phase begins from late November to the end of the month. At this stage, most does are bred, but some might enter estrus at this stage. What changes here is that elevated hunting might pressure deer to be more cautious.

Hunting near bedding areas and on the trails to and from a water source is usually the most effective strategy to use because most deer hide during the post-rut phase.

A second rut might occur at the end of the rutting season. Even though it’s not always guaranteed, the second rut phase can take place during the first three weeks of December.

Does not bred during the first rut go through a second estrus cycle. It’s also possible for yearling fawn does to become sexually active and go into estrus.

The best hunting can take place along bedding and feeding trails. And of course, wherever the does go, the bucks will follow, so open fields are once again a good location. Good placement of a stand in any of those locations should give you an opportunity to take a shot as well.

After hunting season ends, then the results of all that frantic rutting will take hold and does will gestate over the winter months.

How Long Are Deer Pregnant?

Seasonal breeding in deer during the fall means that fawns are delivered when there is the most food available to them, during the springtime. Fawning takes place at the best time to allow the babies a better chance at survival.

Usually, the pregnant deer will choose an area of dense vegetation, or thicket, to protect the fawn from predators. The mother will also lick her fawn clean to disguise its scent as another protective measure.

The mother will then urge the fawn to its feet after 20 minutes of birth. However, it will be left hidden for the first week of life. Fawns are born with fur and their famous white spots that eventually disappear as it matures.

How to Spot a Pregnant Deer

It’s difficult to spot a pregnant deer until the doe is well into the third trimester. At this point, there is a significant bulging to the lower caudal abdomen.

A pregnant deer also tends to keep cleaning its skin and look around from time to time as a cautionary measure. You will likely find the deer roaming with another female that is also pregnant. Mostly, if it’s a doe, in early spring or late winter, chances are it’s pregnant.

Ethics in the Woods

You must maintain a high ethical standard of behavior when you go out in the woods. Most hunters know that regular practice with their firearm is part of ethical hunting. However, those good practices don’t just apply during hunting season.

If you are in the woods, and spot a fawn, there are some things you should know.

When a fawn is wandering aimlessly and crying, this could be a clear indication that the mother may have been hurt and won’t return. Seek help from your local DNR or wildlife rescue groups, there are right and wrong ways to help a fawn and the wrong way can end up killing it.

However, if you find a fawn lying quietly in the woods, do not disturb it. Their mom is most likely nearby and will get back to get fawn once you’re gone. The only time you can take a fawn to the animal rescue is when it’s ill or injured.

Avoid touching a fawn unless it’s clearly in immediate mortal peril, such as on a highway.

What to do if someone has touched a fawn

Does are keen on keeping their fawns scent-free to protect them from predators. If you have touched a fawn and you’re returning it where you found it, protect it too. Leaving human scent may cause the mother to abandon it, or draw other scavenging animals looking for our leavings, who would happily eat a defenseless fawn.

Put on rubber gloves and place a towel in the grass. Wipe the fawn’s body and get the fawn back to safety with your gloves still on.

Did you learn what you wanted to know when you read this post? Let us know down in the comments, we’d love to improve on future articles!