Which is Better Between Striker Fired vs Hammer Fired? - Daily Shooting | Shooting Tips And Reviews
16 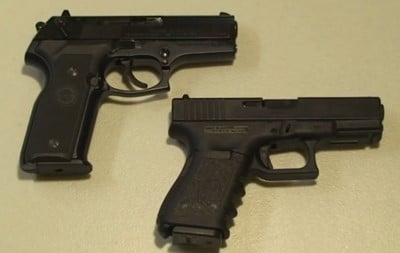 Which is Better Between Striker Fired vs Hammer Fired?

Despite the fact that a striker and a hammer serve the same purpose, they are actually a little bit different. In this article, we will go over the differences between the two and a comparison about when each firing mechanism is better to have.

For starters, striker fired and hammer fired refer to how the firearm actually fires a bullet.

A hammer fired weapon, as the name may imply, has a hammer.

A perfect example is a revolver and any 1911 semiautomatic pistol.

When you rack the slide of a hammer fired weapon, it cocks the hammer back.

When you pull the trigger, the hammer will fall, which strikes the firing pin. The firing pin then springs forward and punches the primer of the cartridge, which then initiates the propellant that sends the bullet down range.

However, one thing to keep in mind is that not all hammer fired weapons have external hammers. There are some weapons that have internal hammers that you will not be able to see.

What about Striker Fired Weapon?

Striker fired weapons are fired by an internal striker.

Think about any Glock firearm. These all work with an internal striker.

One common thing that you hear is that hammer fired weapons are safer. In a striker fired weapon or a weapon with an internal hammer, you are NOT able to decock the hammer or striker.

Usually, the only way to decock the hammer is to fire the weapon, although you can obviously pull the slide back and take the round of the chamber.

My opinion is that both firearms are definitely safe in the right hands, but the external hammer does add an additional degree of safety.

Another reason that I think hammer fired weapons with an external hammer are slightly safer, is that you can actually see the position of the hammer, so you will know exactly what position the firearm is in.

When to Use Each

In my opinion, hammer fired weapons with an external hammer are excellent for new shooters.

Being able to physically see the position of the hammer, and what pulling the trigger does to the hammer is a tremendous advantage to someone new to firearms. However, this is just my personal opinion. Safe handling of any firearm will make it easy for a new shooter to learn and shoot.

The reason for this is that the striker fired weapons don’t have a hammer that can catch on the user’s holster or pocket. Since everything is internal, it makes for a sleeker weapon with no snags or catches.

For home defense purposes, I also prefer striker fired weapons. The reason for this is that I like the point and shoot use. In a high stress situation, there is nothing to worry about other than aiming and pulling the trigger.

For hunting and general shooting purposes, either type of weapon will work, and I don’t really have a preference. The important thing is to ensure that you are using the weapon safely, and are familiar with how it functions.

Related: Best shooting sticks for hunting are great accessories for hunters. Fine out it one is right for you.

The primary difference is how the firearms is actually fired. In a striker fired weapon, an internal striker is cocked back and fired when you pull the trigger. In a hammer fired weapon, there is a physical hammer that does the same.

While both weapons have their pros and cons, they are both excellent choices.

It comes down to personal preference, and whatever you can comfortably and safely use.