Best shooting sticks for hunting are intended to take the pressure off your body when shooting and improve accuracy. Most are relatively portable and collapse down to fit into a large backpack. Many even come with packs or straps themselves, making carrying them around even easier. 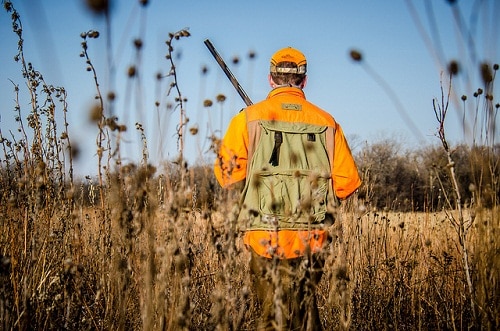 There are a few different builds which we will discuss here- tripods, bipods, and field pods. So what are those?

This is my review about 4 shooting sticks in the market, it will help you find the best for hunting. Check it out:

The top rated shooting stick for maneuverability and overall use

The Primos Gen 2 Jim Shockey is everything you will need in a tripod.

The leg and handle adjust smoothly and easily, and once the tripod is set in position, it rests securely and quietly.

The best part of this tripod and the reason it is a top rated tripod is the nearly silent telescoping leg operation, which operates at the pull of a finger.

The legs are lightweight and sturdy- they will not break, tilt, or collapse under pressure from the gun. Because of the sensitive trigger, users should use caution when resting their fingers near the trigger area.

The device is tall enough for users to stand while using, even if it is in a kneel.

Despite the weight, strapping the Jim Shockey onto your pack is not an annoyance any more than strapping a bipod.

It folds to about 41 inches and weighs three pounds, on the heavy side but this weight allows for extra sturdiness in wind or rain.

It also adjusts nearly on the fly, ideal for shooting with a partner or in the backcountry on variable land conditions.

It greatly improves accuracy on shots over 100 yards.

Because of the remove-able V yoke and adjustable legs, aiming up is no problem and when the legs are flat, shooting comfortably from a sitting position is easy to do.

The newer version of the Primos Trigger Stick Gen 3 acclimates more easily to shooters’ specific preferences. Some of us like to stand at more of a slouch than others, securing the footing even more, while others prefer the upright stance. Whereas the old one was more designed to make the shooter adjust to it, this one is the other way around. Another big plus is the three-legged stand – it’d take quite a wallop of wind to knock this thing over. You’ll find it easier to set the gun and hone in on your target, and a more accurate way to track your shot. Overall, when compared to the older version of the Primos Trigger Stick, the new version is a dramatic improvement. Check Price of the new version here. 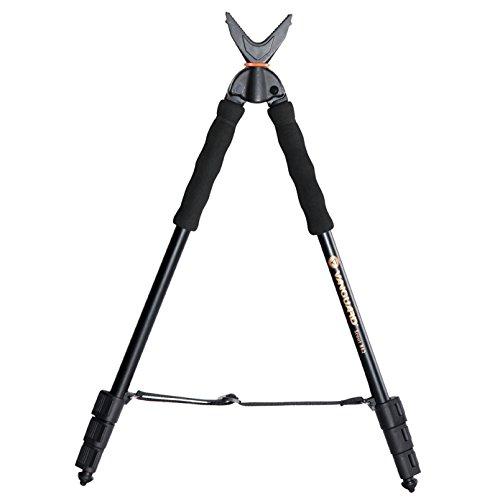 Employing many of the standard features of bipods and tripods, the Vanguard Stout B62 is a top rated gun stand for field use. The V-shaped yoke swivels 360 degrees.

The leg tips are strong and hold place very well in rock and softer surfaces such as grass or dirt.

This product is very lightweight- only 1.10 pounds, and it compacts down to 22 ¼” making it easy to stow. The legs release quickly into four sections. They are clip on legs, not screw on. Secure hand grips are absolutely necessary with a bipod, and the Vanguard offers cushioned, comfortable grips that will not irritate the hands. Users should hold it still, maximizing silence, and the ability to shoot game from longer ranges will greatly increase.

The biggest benefit of this product is that everything about it is practical for actual field use- Vanguard leaves the flashy add-ons off and focuses on maximizing the efficiency and usability of each part of this bipod.

It sets up quickly and is incredibly stable.

If you are looking for a bipod instead of a tripod, this one is perfect- it can hold rifles in excess of eight pounds without stressing the frame. Ideal for big game hunting scenarios but can be used at the range to perfect technique before taking into the field. 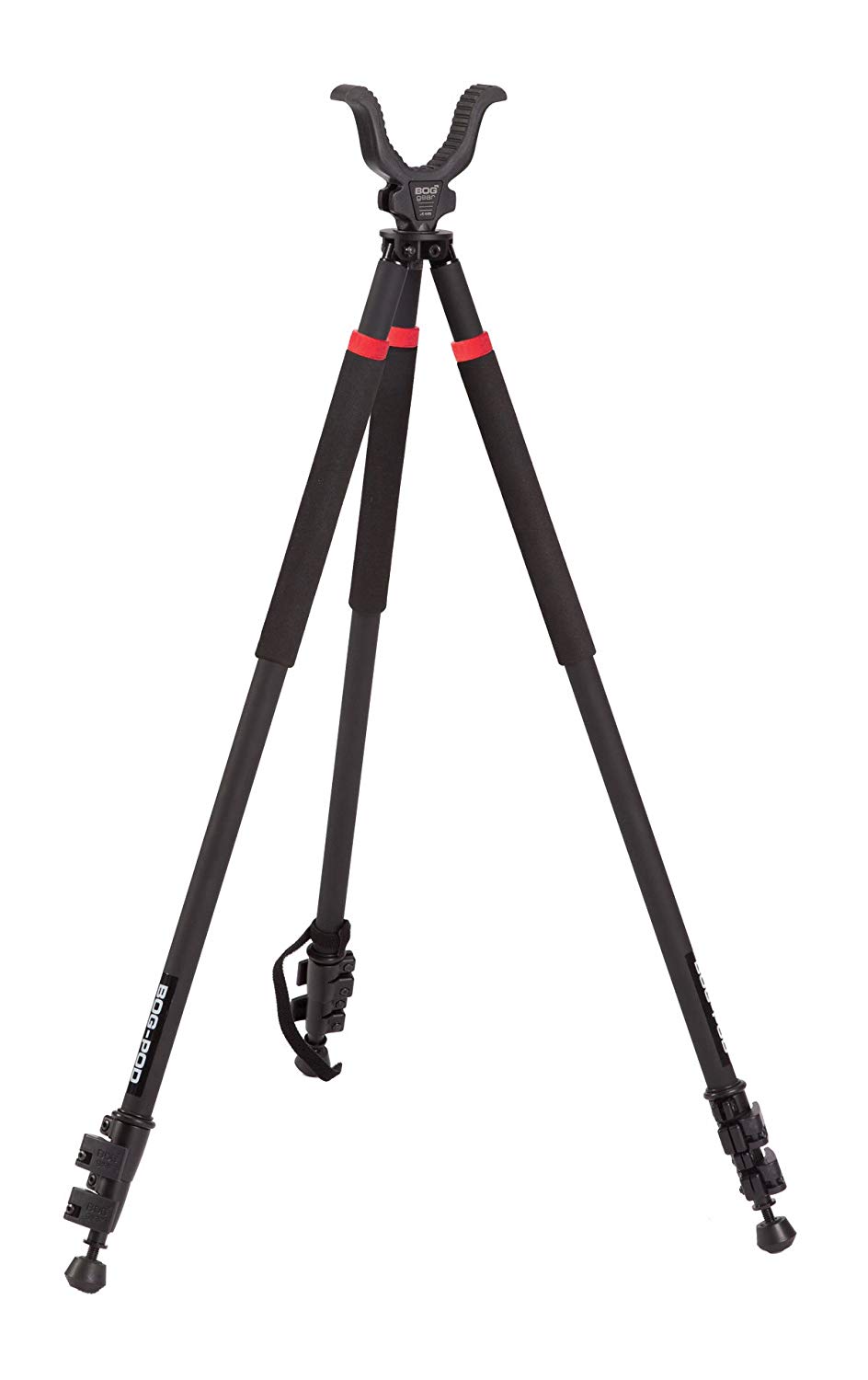 This unit is just a bit taller than the Jim Shockey when fully extended, and has a more flexible V yoke.

Made from aluminum alloy tubing, the tripod weighs only 38 oz. The folded length is 32 inches, making it one of the most compact tripods of its size. The big seller here is the flexible V, which pivots freely and allows for improved accuracy when shooting from an off-hand position. It rotates a full 360 degrees.

For placement on rock surfaces, the tips of the legs are outfitted with carbide tips, and the tripod comes with a Velcro strap tie down. For transport, users can utilize the nylon carrying pouch that comes with the unit or hook on/stuff into a pack if they have one large enough. The carrying pouch does have a shoulder strap.

The legs extend and secure easily and securely, and because of the 68” max height, even very tall hunters will have no problem using this tripod. When extending the legs, the suction effect that holds them in place increases in strength the higher the unit is set at, making it very secure and stable even at max height. There are no foam pads on the legs or unit in general, but users will find that they aren’t necessary because this top rated shooting stick tripod is stable as is. 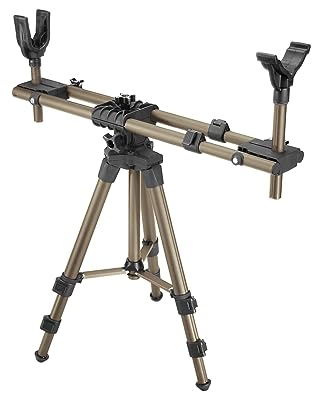 Caldwell has taken the pod approach and redesigned it for maximum stability with the Dead Shot.

This field shooting stick is a top rated shooting stick because there is no better way to improve accuracy on long range shots. It is heavy- weighing 6.6 pounds. The maximum height is 42”. The windage is perfect on this pod. Multiple adjustment points allow for total control of your shot. If you prefer to hunt from the ground, this product will improve your accuracy and consistency when placing shots.

The best thing about this product is that it pivots up and down as well as rotates left and right silently, allowing users to track their target and shoot at the point they feel most comfortable. While not practical for quick moving, the Caldwell Dead Shot is perfect for hunters who spend a long time in the stand.

It is versatile with many different types of guns and takes weather out of the equation when hunting. Rain, mud, general muck, and dirt, will not affect your shot or dirty the rifle. This best shooting sticks can also work with a crossbow without much adjustment other than fitting the hold. A solid product if you don’t mind the size and weight.

The Primos Gen 2 Jim Shockey is the strongest tripod shooting stick on the market, beating out the others here in usability and the ability to easily set up and pack. Despite being sensitive, the trigger stick also sets this product apart. The Hammers Telescopic Shooting Tripod offers a lighter weight but falls short on stability when compared to the Jim Shockey. If total stability is your desire, the Caldwell Dead Shot is the best around, just make sure you are prepared to haul it back and forth and don’t plan on being super mobile during your hunt. The Vanguard Scout B62 is the best bipod shooting stick on the market and if you will be moving around, changing angles, or don’t have a large amount of carrying space, a bipod is a strong option for you. Overall, the most versatile and top rated shooting stick here is the Primos Gen 2 Jim Shockey. You will not be disappointed with your purchase.

In last, hope you will find the best shooting sticks for hunting. Good luck!!

Shooting sticks that are tripods and bipods are typically made out of carbon fiber or aluminum, much like a baseball bat.

The lightest ones will be made out of carbon fiber. Aluminum options tend to be a bit more stable and potentially longer lasting. Ideally, a tripod or bipod will be compact and strong- compacting down to below 20 inches for transport.

For most stands, you will be looking at a weight of between two and three pounds on the light end and up closer to eight or ten pounds on the heavier end.

Obviously, lighter shooting sticks are easier to move around. The same goes for stands that compact to a smaller size. But be sure to consider how much moving you the hunter will be doing in the field. If you are going to be in one spot for an extended period of time and will be shooting from a far distance, a heavier stand may actually be better for you than a lighter one. Lighter stands provide optimum efficiency for quick set up and break down but are more susceptible to factors such as the wind, water, and mud.

The legs are the most important part of a shooting stick. Will they hold stable when a heavy gun is resting on top? Or when it fires? How about if water is involved, such as mud or rain? Stands with a suction element on the legs tend to help with this without adding weight. Look for legs that can easily be adjusted to different heights and that compact to as small as possible when not in use.

These days, most V shaped yokes can rotate 360 degrees and allow for easy aiming up or down. On larger shooting sticks such as the Caldwell Dead Shot, you will not have that flexibility, but then again that’s not why you buy that stand. It is for maximizing accuracy and still allows up and down aiming as well as a good amount of rotation. Consider your situation in relation to how comfortable you feel with your marksmanship- if you are less comfortable, get a larger stand.