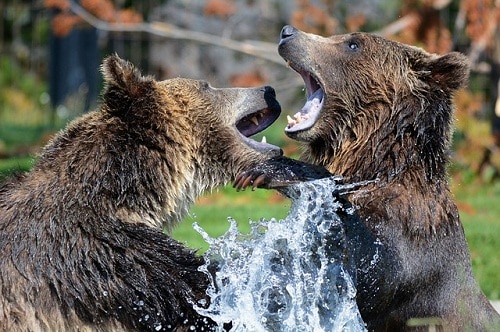 The Best Ways to Hunt and How to Kill a Bear

The more elusive and ferocious the big game is, the more exciting and invigorating the hunting process will be. This is definitely true for those who are engaged in big game hunting, especially, those who hunt bears whether these bears be Grizzly or brown bears. Bear hunting has already been one of the favorite sports of hunters since time immemorial.

In modern times, however, bears have been one of the favorite big games by hunters because of their ferocity and size. Game hunters, for example, experience more excitement in hunting black bears than the common white-tailed buck for the following reasons: how to kill a bear

There are many weapons that you can use to hunt bears, and of course, the best weapons would be those of bows and rifles. Both these weapons can inflict a fatal wound on bears as long as you know exactly where to fatally hit the bears. If you are going to use a bow, the ideal shot that you should use would be an arrow that can readily pierce through the lungs of the bear. It is likewise advisable to hit both lungs because bears can definitely run a distance even with only one lung functioning. A precise shot at the lungs of the bear with an arrow can surely drop dead a fierce bear. Furthermore, you can use any type of bow that can pierce through the lungs of the bear, whether the bow be single cam or dual cam.

Similarly, if you are using a rifle, the best shot would be through its lungs. It is critical that you are cognizant of the anatomy of the bear so that you can rightly aim at the parts of the bear that are vulnerable enough to cause it a sudden and abrupt death. The lungs of bears are located slightly farther back while their shoulders are a bit angled forward. Always remember that any hunter should aim at the quickest death of his or her prey as a general ethos of hunters. If you are using a rifle, you should carefully choose the right rifle for bear hunting. Your choice should depend on your ways of hunting, maneuverability and accuracy, versatile optics, and iron sights.

If you are engaged in bear hunting, you need to know where to hit the bear to instantly kill it. Moreover, it is also crucial that you get some of the helpful tips on how to fatally hit your prey.

Whether you are using an arrow or a rifle, it is important to know where you want to lodge the arrow or bullet on the body of the bear. Given the fact that you already got the best bow and arrow and rifle at hand, you still need to know where to aim the arrow or bullet on your target. This process is called bullet or arrow placement, and if you are seasoned hunter, you definitely know what part of the anatomy of the bear is the most vulnerable and can inflict immediate death when hit by an arrow or bullet. Hitting the bear in the heart or lungs can surely bring immediate death to the bear. Canadian bear hunters, for example, suggest that you should aim at the “middle of the middle” or at a point where front and hind legs intersect with back and the belly of the bear.

Using best shooting sicks to focus on your target is the best idea.

The most appropriate shot that you can engage in is the lung shots. If you hit a bear on its lungs, it is almost certain that the bear will drop dead, especially if you hit both lungs of the bear. It will seldom move or travel beyond 100 yards when you hit it on its lungs. Moreover, the lungs are bigger targets aside from being a deadly zone to hit. You also have very little margin of error when you aim for the lungs. On the one hand, if you shoot a bit low, you may hit the heart, and if you shoot a bit high, you will surely hit the shoulder which will also be quite debilitating to the bear. Likewise, if you miss the lungs by an inch, you will surely hit one of the vital organs of the bear such as the liver or any internal organ.

Some hunters may deliberately aim for the heart of the bear, but it is too obvious that the heart is a more difficult target than the lungs. Likewise, the heart can be covered or hidden from sight by the upper legs of the bear. However, if you aim for heart, you definitely would hit one of the vital organs of the bear if you miss the heart by an inch. Hence, it is also a good target to aim at. You should bear in mind, however, that a bear shot in the heart usually travels farther than that of a bear shot in the lungs.

Other shots like neck and head shots and shoulder shots can also inflict major wounds on the bear. Moreover, these shots can also be fatal to the bear. However, in many instances, these shots do not bring immediate death to the bear, and for these reasons, bear hunters prefer to take aim at the lungs and the heart instead of aiming for the head, shoulders, and neck shots.