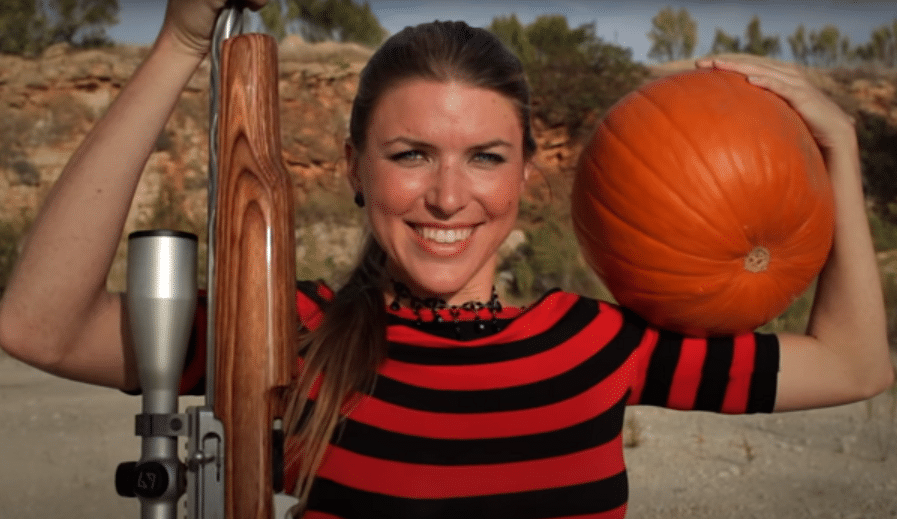 Ready to learn how to carve a pumpkin with a handgun (or AK-47)? We’ve got you covered with a bunch of great video examples all gathered in one place! Thanks to hickock45 for the bulk of these great videos!

With fall gearing up, that means it is time for cooler weather and outdoor fall activities. It is time to get that fire pit going, get ready for deer hunting, and to start thinking about carving those pumpkins with your handgun.

Combine two fall favorites into one activity. Most people carve their pumpkins with knives but why not take the opportunity to show off your precision skills with your gun?

Related Read: How Often Should I Clean My Gun?

You only need a couple of items for this activity; grab your gun and a pumpkin.

Your Setup for Carving a Pumpkin with a Handgun

Your typical pumpkin carving setup involves drawing your ideal expression on the front of your pumpkin. Afterward, you find yourself a sharp enough knife and stab through the shell and carve as artfully as possible.

For some, this task is easy and artistic. For others, it is a safety hazard and involves stitches. However, there is another way. You can carve your pumpkins from a safe distance with your handgun or rifle.

In these demonstrations, you will notice some details. In the first several videos, the pumpkins are already scooped out and ready for carving. However, instead of using a dangerously sharp blade to carve the ominous features of your jack-o-lantern, you use your every day and ordinary handguns and rifles to perform this task.

You need a safe place to practice, once you learn how to carve a pumpkin with a handgun, along with all the safety gear you might expect. Be sure you have a suitably sized pumpkin and your gun.

You can get relatively close to your pumpkin to do the carving, but feel free to challenge yourself with some distance. Maintain a proper distance, have ear protection, and shoot safely! When you are done, make sure to unload safely, too.

Ideally, you can place your pumpkin off the ground while shooting. Lastly, consider bringing a few extra pumpkins. This task has the potential to create some pumpkin casualties. Plus, it is fun, and you will want to keep going.

In this video, the carver is using a Colt 1911 Series ’80. You will notice he is not that far away from the pumpkin, and he is wearing ear protection. He starts with the nose before moving onto the eyes, followed by the mouth. His shots are precise, and it turns out pretty good. In fact, the back of the pumpkin looks like a face, as well. It was not torn out all that much.

You can watch this unfold in the video below:

How to Carve a Pumpkin with a .44 Magnum S&W

This video demonstrates the use of a .44 Magnum Model 29. With the pumpkin on a stand and while sitting close by, the shooter takes out the face of the pumpkin. The .44 Magnum is a double-action revolver. It has six shots, and its chamber holds the .44 Magnum cartridge. The pumpkin’s face turns out great, although there is some curiosity about the look of the back of the pumpkin.

You can watch the video below for a guide on how to carve a pumpkin with a handgun.

How to Carve a Pumpkin with a Desert Eagle

A Desert Eagle is a semi-automatic pistol designed by Magnum Research. The pistol is magazine-fed and considered a powerful handgun.

The pumpkin carving demonstration has the shooter laughing as he carves his pumpkin with his gun, and the pumpkin ends up with a suitable and charming smirk.

Catch the video below:

How to Carve a Pumpkin with a Henry Rifle

In this video, the shooter is carving a pumpkin with a Henry Rifle. The Henry Rifle is a lever-action rifle that dates back as far as the 1860s. The shooter carves a fantastic face in the pumpkin in this video.

Surprisingly, the pumpkin does not blow apart too much. It helps if the shooter is exact with his shots, however. Although, we do not get to see what the back of this pumpkin looks like.

You can watch the video here:

How to Carve a Pumpkin with an AK 47

Yes, you read that right. The shooter is carving a pumpkin with an AK 47. The AK 47 is an assault rifle. The AK of the name stands for Avtomat Kalashnikova because of the Russian designer. Also, the AK 47 is simple to use and reliable.

In this video, the shooter takes a seat and carves the nose and both eyes with several shots. The last shot to the mouth almost destroys the pumpkin, but it ends up working out for both the shooter and the carved pumpkin. While the AK 47 is not common as a household tool as described, it looks more fun than having to clean up pumpkin parts off the kitchen table.

You can watch the video here:

How to Carve a Pumpkin with a Glock 23

A Glock 23 is either a compact or mid-size .40 caliber handgun. In this video, the shooter has his pumpkin set up and ready to go. He wastes no time with some pretty tight groupings shooting out the features of the pumpkin’s face. Again, this is another time we would love the see the back of the pumpkin after carving.

Be sure to watch this video to the very end after the shooting. You will see what it looks like lite up at night. You can see the video here:

How to Carve a Pumpkin with a Volquartsen Semi-Automatic .22

The 22 bullets do not cause holes with a large diameter, so she has to use more than one shot to create her shape in the pumpkin. She is not trying to shot in the same spot but instead grouping to make the necessary shape. In the end, it looks great both front and back.

You can check out the video below.

You could carve your pumpkin the same way as everyone else.

However, those store-bought carving kits are difficult to work with and the stencils are often boring.

There are other ways to create your spooky features on your pumpkin: you could carve a pumpkin with a handgun.

Grab a few pumpkins, your safety gear, and your guns, and challenge yourself with some fun with precision shooting by practicing how to carve a pumpkin with a handgun.

How did your pumpkin carving with a gun turn out?

A teacher by trade, Victoria Caine splits her free time between freelance writing, her camping blog, and (frantically) guiding her teenagers into becoming functional adults.