What is the Difference Between an AR-15 vs M4? - Daily Shooting | Shooting Tips And Reviews
42

What is the Difference Between an AR-15 vs M4?

Wondering what the differences are between the AR-15 vs M4 carbine?

The M4 Carbine used in the military and the civilian AR-15 are extremely similar weapons.

Look no further. In this article, we will go over some of the similarities and differences between the two weapons.

To start, we will talk about the history of both weapons.

The AR-15 was originally created by Armalite (as in ArmaLite Rifle ... not Assault Rifle) in the 1950s, but due to financial issues, they sold the rights for the weapon to Colt.

Colt began producing the Colt ArmaLite AR-15. It was designed to be a lightweight assault weapon, so as a result, Colt pitched the weapon to multiple militaries.

After some modifications by Colt, the rifle was introduced in the military as the M16.

The M4 was created as an improvement to the M16.

Once the military realized the need of a weapon that could operate in close quarters, a shorter and lighter version of the M16 was created.

The M4 was designed in the late 80s to early 90s, before being accepted by the military in the mid 90s.

Compared to the M16, the M4 features a shorter barrel and a collapsible stock, as well as a few lighter parts to cut down on the weight.

if you have an AR-15, you can find the best AR-15 scope, it will help you have good result in shooting

What is different between AR-15 vs M4?

To compare the M4 to the AR-15, we will start with the differences because there are so many similarities. 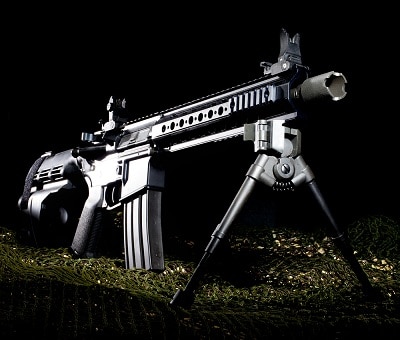 Best Ar Bipod For The Money (For Both Ar10 and Ar15

The differences between the two are extremely small. The M4 has a 14.5 inch barrel, while the AR-15 generally has a 16 inch barrel, although multiple sizes are available.

The primary reason for this is the law in the United States about short-barreled rifles. This law requires that rifles have at least a 16 inch barrel.

The barrel of an M4 has an hourglass shape cut into it, which allows for military members to mount a grenade launcher to it. The last big difference between the two is that the M4 has either a three round burst or fully automatic firing option.

As you can tell, there are very few differences between the two weapons.

The internals of the upper and lower receivers are very similar in both weapons.

The bolt and bolt carrier group of the two are the same.

The charging handle is the same.

The trigger and trigger assembly are the same.

Externally, the handguards and rail systems can be the same, dependent on which one you have on your AR-15.

Here is video about the fact you should know before buy an AR-15 or M4:

This is pretty much a trick question. Many people don’t know this, but the only way to get a true M4 is to go and talk to your local military recruiter.

However, it is possible to get an AR-15 with the shorter barrel, as long as you have the proper tax stamp.

As far as the fully automatic feature, another tax stamp is required.

As you can see, the two weapons are extremely similar. There are very few differences between them.

The primary differences are the barrel, gas tube, feed ramps, and fully automatic functioning. In terms of similarities, the two are nearly identical.

If you have an AR-15, rest assured that it is extremely similar to the military M4.