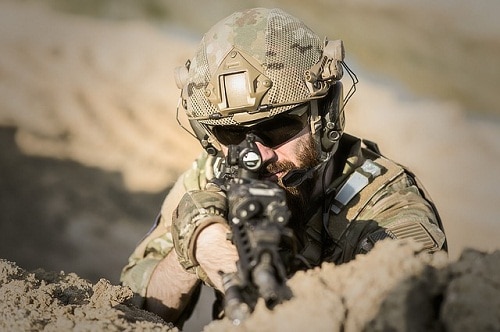 The Best AR-10 Models on a Budget

The AR-10 is definitely one of those rifles you’ll want if you’re a rifle aficionado, not only because it’s awesome, but also because it’s the forerunner of other versions of ArmaLite. There wouldn’t be an AR-15 without an AR-10 — it’s good to know where the modern versions of ArmaLite came from. Before we discuss which is the best AR-10, let’s look back on its history.

Back in the day, the AR-10 ruled over other rifles on the market. When Eugene Stoner developed the AR-10 in the late 1950’s, he definitely knew he was up to something great. Hence, when the first AR-10 graced the rifle market, most rifle enthusiasts and hunting fanatics wanted to get hold of the AR-10.

The reason being was because it was very innovative with its straight-line barrel and stock design that had never been used before. It’s made of phenolic composite and some forged alloy parts which makes an AR-10 significantly smaller compared to other rifles back then. Plus, it allows its users to have more control during automatic firing. Furthermore, it was lighter compared to other infantry rifles during those days.

Throughout its existence, the AR-10 has evolved and been rescaled. In fact, it was rescaled in 1957 and was substantially improved to allow for the use of the .223 Remington cartridge. However, it was not only the military who wanted to gain access to the AR-10; even governments who learned of the effectiveness and efficiency of AR-10 became interested in buying this highly taunted rifle.

Find the best scope for AR 10 in my recent article

Variants of the best AR-10

Fairchild holds the patent for manufacturing the AR-10 in the late 1950s. But, in 1956 the US Army was adamant about replacing the old M1 Garand, so Fairchild submitted two prototypes of AR-10. However, he was not successful in its bid at that time and the conventional T44 won the bid.

When the manufacturing license for AR-10 was bought by Artillerie Inrichtingen, the AR-10 had the potential to become mass-produced. Nicaragua ordered around 7,500 rifles; however, the deal was canceled once General Anastasio Somoza was almost hit by the ejector during the endurance test for the old AR-10.

Experts in firearms advise that there are distinct variants of AR-10 that were produced under Artillerie Inrichtingen— the Sudanese, the Transitional, and the Portuguese models. The good tips for you, you can use the best shooting ticks to hold the ar10, it will help you have the best target.

The Best AR-10 For A Budget

Now that you know a little more about the AR-10, let’s discuss some of the best budget options. The prices listed below are estimates, as costs are always changing because of newer models coming out and discount sales, but we’ll provide you with an approximate price.

The DPMS Oracle is a simple entry-level AR-10 that works well, especially for its cheap price. The barrel is 16 inches and made of chrome. However, the stock, handguard, gripe, and trigger are all relatively basic, but function well. Besides being affordable, this is also a very customizable gun— which means you can make adjust it to suit your style. Also, you can fit a scope to it without any issues. Not to mention the accuracy is great and it’s a reliable entry-level gun.

The Windham is an upgrade from the oracle. The barrel is 16.5 inches and contains chrome-lined steel. The attachments that it comes with like the handguard, gripe, and stock are all basic, but they can be upgraded. The top is optic compatible and you can attach it to pretty much any scope you want. Plus, the trigger is a standard single action. If you want a gun with excellent quality and is customizable, then this one is a great option.

Another gun within the $1,400 range is the Aero M5E1. It has incredible accuracy and comes from a respected brand for both entry-level AR and name brand models. The barrel on the base model is 16 inches and chrome, but you can upgrade it straight out of the box for an extra fee. It has a single-action trigger but functions very well. It’s not too loose or too tight, and this gun can handle scopes and other accessories well because it’s customizable. With the Aero M5E1, you don’t have to worry about getting low-quality due to spending less— it comes from a great brand and fires an expensive AR-10.

Getting into a more pricey model, we have the Armalite AR-10. The original AR-10 manufacturer makes this gun, so you know it is top quality. The barrel varies in length depending on the one you choose; however, it’s made of steel. That means it will have better accuracy than the previous brands on this list. Also, the handguards and stock are starting to improve in quality. While the above rifles on this list aren’t bad— especially for the cost— this one is better.  Another thing that sets this gun apart is that it has a two-stage trigger. It most kinds of optics and can be customized the way you like it.

Last on this list is the Daniel Defense DD5, which comes in a few different versions, and this gun is worth every penny. The barrel is free-floating and forged from cold hammered steel, and the stock is adjustable and customizable. Additionally, the rail is long and can hold many attachments. It has a two-stage Geissele trigger, plus the accuracy on this gun is exceptional. Depending on what model you get, the barrel ranges from 18 inches to 20 inches. So if you are in the market for a high-end rifle, this is the one. It is perfect for any type of shooting, from defense to hunting.

Tips on Buying The Best AR-10

The primary thing to understand if you want to own the best AR-10 is knowing your options. You can either assemble your own AR-10 or buy a preassembled one. If you are going to assemble it yourself, you should know how to shop around for quality parts. However, if you want to buy a ready-made AR-10, there are plenty available for purchase. However, bear in mind that the quality of the AR-10 unit that you get depends on the quality of the manufacturer. Here are a few other things to consider while you’re shopping around:

The trigger is the aspect that determines the rifle’s accuracy. It comes in either a single or double stage and each is adjustable. The advantage of a dual trigger is that you can feel when the trigger is about to break, which provides a more accurate shot. However, shooters have different preferences regarding trigger weights. Cheap triggers are spongy and heavy, so remember that when you’re shopping around.

Armalite and DPMS are the two primary patterns of the AR-10, and although Armalite was the original design for the AR-10, DPMS has more to offer. It provides more compatibility with other brands, and some of its features are interchangeable with the AR-15.

Various factors determine its accuracy, and the specific load and bullet weight depends on the harmonics and size of the barrel. The AR-10 has attributes that give it incredible precision like the bolt carrier, stock, locking bolt, and the alignment of the bore. An AR-10 that’s well-built provides accuracy of one MOA or greater.

Final Thoughts On The Best AR-10

The AR-10 will always remain a desirable weapon for rifle aficionados. Despite the emergence of newer versions and more novel rifles, the rustic AR-10 will still remain dear to the hearts of gun enthusiasts.

Well, now you know to shop for the best AR-10, and you know of a few brands and models to browse to find the best AR10 for your budget. The great thing about the AR-10 is that it’s a versatile firearm and a very customizable gun. No matter which model you buy, you will be happy with it.

I hope this article helped! I also have another article about the AR-10 vs AR-15 you might want to check out.