Which Shotgun Choke is the Most Open? - Daily Shooting | Shooting Tips And Reviews
0

Which Shotgun Choke is the Most Open?

Which shotgun choke is the most open? For those of us in the firearms community, the term ‘pattern’ is something that arises frequently. This refers to the column of round shot pellets leaving the barrel of the gun. As they move further away, they begin to spread out. Towards the end of the shotgun’s range, targets will be missed by the pellets as they spread further apart.

The shotgun choke is the response of gun designers in their attempt to combat this effect. Choking means that the bore is restricted, which will keep the pattern closer together for longer distances.

Which shotgun choke is the most open?

The most open shotgun choke is called a ‘cylinder.’ The easiest way for you to analyze this is to look at the muzzle end of the barrel. You’ll notice that with cylinder chokes, there actually isn’t any constriction at all. The diameter of the choke is the same as the inside of the shotgun barrel. There is the lowest amount of bore reduction.

Restriction is essentially non-existent here, which causes the pattern to spread out much more so than with higher restriction chokes.

The tightest kind of shotgun chokes are called ‘extra tights.’ These are basically the opposite of a cylinder choke. Restriction of the pattern’s spread is maximized, for increased long-range target accuracy.

For larger game, tighter chokes can help with targets on the move and further away. But for me, it’s been many years since I’ve used a tight choke. I don’t do much other than duck hunting anymore. I’ve got a buddy who is a diehard fan of turkey hunting, and he prefers to use a tight choke. Here is a great video explaining shotgun chokes with visuals.

If you are using a shotgun and want to go deer hunting, choose the best scope for shotgun for deer hunting, and you will not regret it.

Why do I want to use a looser choke?

The biggest advantage to using a looser choke is seen particularly by duck hunters. With waterfowl, a super tight choke can have two effects when using steel pellets (lead pellets were outlawed by the federal government for waterfowl hunting in the nineties):

So, to prevent these two things from happening, waterfowl hunters began using more open chokes. Hence, the rising popularity of the cyclinder.

I first began to prefer an open choke shortly after the regulations took place in 1991. By the following season, I began noticing severe distress to the barrel of my shotgun. This began to have a great impact on my hunting, so I started using the cyclinder choke. 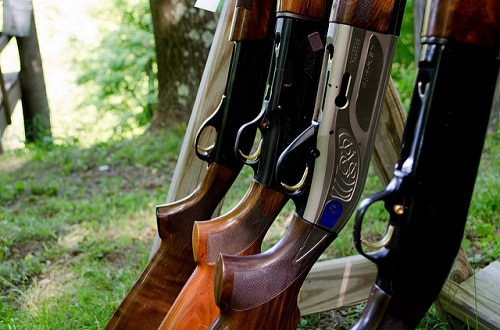 Ever since, I’ve been working on ways to maximize my shooting accuracy with the most open choke, and have gotten a lot better. It takes an immense amount of practice, but at the end of the day I have better meat resulting from my increased shooting skill level. All without damaging the barrel of my gun.

When selecting the best choke for your shotgun, the most important factor is to consider what type of game you are hunting. For turkeys and larger game birds, a tighter choke is going to be the better option.

For those of us duck hunters, the cyclinder is the most open shotgun choke and therefore the best for us. I always recommend heading to the range and spending ample time on the patterning board prior to hitting the field. Notice how the pellets strike the target, and adjust your shooting technique as necessary.

Many new hunters don’t realize the advantages of using an open choke on their shotgun when waterfowl hunting. I’d appreciate it if you shared this article on social media so that more new hunters can learn of the pros and cons of different chokes. Do you have any techniques you’d like to share? Go ahead and leave them here in the comments, and we’ll get a discussion going.