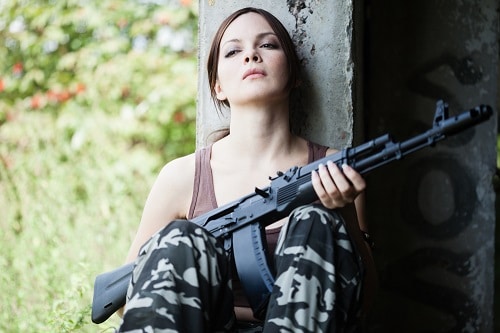 Guns have all kinds of different parts. There is the grip, trigger, barrel, and even others. These parts can generally be switched out with other parts of the same type to customize the gun to the way you want it.

In this article, we are going to focus on the barrel and talk about a kind of barrel that is different than a normal barrel. The barrel we will discuss is the bull barrel. After reading this, you will know what a bull barrel is. You will also understand the benefits of one and have an idea of when to use one. Read on to learn everything there is to know about a bull barrel.

What is a Bull Barrel

How did it get its name?

So, if a bull barrel is just a barrel that is heavier and usually thicker than a standard barrel for a particular gun, then how did it get its name? Well, the answer to that is that it most likely got its name from a machinist named Freeman R. Bull in the 1800s. He worked for Springfield Armory and started experimenting with barrel thicknesses. He was a great sharpshooter and learn the benefits quickly of a heavier barrel.

This is why some say how this is how the name came about. This is a short version of the story and is just a story. Another explanation for why they are called bull barrels is because they are stouter than a regular barrel and bulls are also stout. This is more likely to be the reasoning behind the name. Some people also call bull barrels heavy barrels because they are indeed heavier. The two names can be used interchangeably and be correct.

Effects of a Bull Barrel

So, now that you know what a bull barrel is and the history behind the name, we can get into the impact a bull barrel has over a standard barrel. The first effect is since it is thicker it can absorb heat better. This means that it takes longer for the barrel to heat up. On a thin barrel, it takes fewer shots to warm the barrel up than it does with a bull barrel.

The reason it is essential for the barrel not to heat up is that metal expands when it gets hot. This means that the opening gets ever so slightly wider, so a hot barrel can affect how the bullet comes out.

Another effect of having a bull barrel is that it vibrates less. This makes sense because it is heavier and it takes more force to move something more massive. Also, since the barrel is thicker, it is stiffer.

This stiffness is another thing that helps absorb the small vibrations. The heavier barrel also makes it stronger, so the barrel is less likely to get damaged. It is less likely for the barrel to warp or become out of round from a dent.

These two things put together means that a bull barrel will generally be more accurate. Accuracy is affected by how well the bullet comes out the same way every time and since the bull barrel doesn’t expand as fast from heat and it doesn’t vibrate, the bullet is more likely to come out in the same place every time.

Also, the barrels riffling on the inside affects accuracy and bull barrels are preciously rifled to help them be accurate. A bull barrel needs to be well made though to get the most benefits in accuracy though.

Outside of being more accurate than a regular barrel for ar 15, there are a few other benefits of a bull barrel. One of those is less recoil which each shot. That is because the extra weight helps to keep the barrel down since it would take more force to move a heavier barrel up. This should make, and the lower recoil helps keep consecutive shoots accurate.

The other benefit of a bull barrel is that they are easier to shoot with your off hand. Most people get comfortable shooting with one hand over the other. It usually is there dominant hand like anything else. When off-hand shooting, people frequently have a harder time keeping the gun stable and balanced. The extra weight of the bull barrel helps with this.

You would think more weight would make you more wobble since your off-hand muscles aren’t as strong as your main hand, but this isn’t the case. The extra weight moves the balance point of the gun towards the end of the muzzle, and this makes it easier to balance for offhand shooting.

The great things about guns are that you can customize them any way you want. If you want top accuracy, less recoil, or want to show off with off hand shooting, then a bull barrel is for you. If you don’t need high accuracy though or are going to be shooting or carrying your gun a lot, then you might want to cut down on weight and not use a bull barrel.

The nice thing is a bull barrel can go on any gun, and there are no technical specifications of what makes a bull barrel. A bull barrel is just a barrel that is heavier and thicker than a normal barrel for that particular gun. After reading this you now know what a bull barrel is, what it does, and the effects it has on your shooting, so you can decide if you want to use one or not.