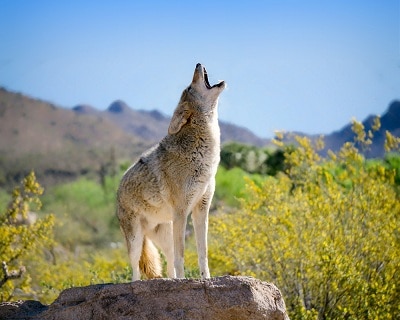 5 Frequently Question You Need To Know About Coyote Howls?

Coyotes are among the most common animals hunters run into both at home and in the wild.

They are spread across the US, with the eastern coyotes being larger than those seen out west.

Coyotes are interesting animals, and very vocal to boot. They are one of the few animals not easily displaced by expanding cities. Coyotes are often seen sprinting across roads, railroad tracks, even parking lots of shopping centers.

Perhaps their most notable trait is the coyote’s howl. Let’s take a look at some basics of coyote howls, and everything you need to know about them.

Everything you need to know about coyote howls

The short answer is YES!

Coyotes do howl, and because they travel in packs, they often howl all at once.

A coyote howl is kind of like a high-pitched squeal. In some ways it is similar to a dog bark and in other ways it is very different.

The howl starts relatively calm, with some yipping and squealing. As more and more coyotes join in, it starts to sound like a group of old people laughing hysterically all at the same time. In the most annoying, high-pitched laugh possible.

Many who live in Western areas like Colorado, Utah, and other states encounter coyote howls regularly.

Those that live on the fringe of big cities or in rural areas often here the howls at night, after dusk, as the pack moves towards their location for the evening.

Here is a great video of coyotes howling:

The coyote howl is the main form of audible communication between coyotes.

Coyote packs, typically families, may spread out to hunt on their own.

The howl, in this case, would be started by a pack leader with the intention of bringing the pack back together again.

A prolonged session of howling may indicate that the pack is spread out. As more and more coyotes join in, the collective howl continues to get louder and more prolonged.

Embracing the true pack mentality, coyotes are territorial creatures. One pack crossing onto the territory of another pack (often a larger or more settled one) is severely frowned upon. This is a frequent source of why coyotes howl. The howl is basically a warning, as if to say “Stay off my lawn.”

3. When do coyotes howl?

The main coyotes doing the howling are the small group (often 2) of lead coyotes who are mated and head the pack.

Because of the way that their howls change pitch as they are emitted and pass through the surrounding environment, it often sounds as though there are as many as a dozen coyotes howling at once.

This is usually not the case when orders are being barked.

However, other coyotes will howl when they need to respond. If other pack leaders are in the area, they may decide to start howling as well, and this is when coyote howls really get going.

They can stretch across acres of terrain. In suburban areas, because coyotes aren’t turned off by the houses and development, this often causes quite a noise disturbance.

This type of howl will be done usually by only one coyote at a time, and isn’t meant to cause a whole chorus of replies.

If you are walking your dog and the coyote catches wind of it, he may emit a howl at the perceived threat. This can also happen when no dog is present.

4. What do coyote sounds mean?

Whether that be a warning from the alpha coyote to the rest of the group, or one coyote noting a threat.

It can also mean that there is a disturbance or annoyance to that particular animal.

Often, coyotes will howl to alert the group of a threat real or imagined.

Maybe a coyote is wandering around the edge of a territory and comes across something of note. A howl may then be used as a signifier.

Coyotes have great hearing, and can often comprehend a howl and its purpose from over a mile away. This is especially true during group howls, as the sound carries across the landscape. A coyote may emit a howl so that others in the pack know where he or she is and can find their way to their family member.

Here is a video of different coyote howls and noises.

5. What should I do when I hear a coyote howl?

If you hear a coyote howl, but can’t see the coyote, the first thing to do is keep an eye out. They are nearby, and are likely aware of your presence. They aren’t prone to attack humans straight away. They also spook easy and will retreat if they feel threatened.

In most cases, the coyote howl is internal communication between the pack and not intended for you at all. When more than one coyote is howling at a time near you, they are using normal communication to call the group back together or perform other routine tasks. It can sound intimidating, but shouldn’t necessarily be perceived that way. Coyotes aren’t usually on the prowl for humans in highly populated areas.

Still, it is advised to move away with caution. Absolutely do not run at the coyote or throw sticks or rocks at it.

This should give you a basic understanding of coyote howls and what their intended purpose is. If you are using ar10 rifle, i have the post about the best ar10 scope for hunting, you will find the good scope for your ar.

As you can see, these howls are not usually meant to be threatening to humans in any way.
The coyote communicates with those in his pack regularly, and the howl is their standard verbal diction.

There is no need to fret when you hear a coyote howl. Instead, stop and listen and try to figure out what you think the coyote is trying to say.

Share your thoughts on coyote howls down below in the comments.

Also, please share this article on social media so that we can spread awareness of what coyote howls mean and break any preconceived notions that are just plain false.