Hunting a Coyote? Let’s Find How to Trap a Coyote - Daily Shooting | Shooting Tips And Reviews
1 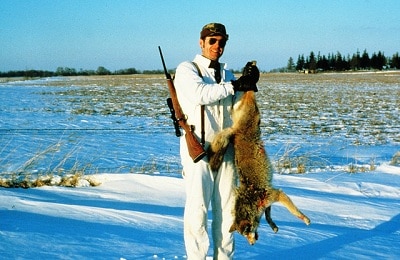 Hunting a Coyote? Let’s Find How to Trap a Coyote

Is a coyote being a constant nuisance to you, your property, or your animals? The best option for you may be to learn how to trap a coyote. This is a tricky task, but it can be done. I trapped my first coyote at the age of 22 after several failed attempts over the years. My grandpa had the method down to a science, but it took me many tries to finally get it right.

Here in this article I’m going to fill you in on how to trap a coyote, and mistakes to avoid during the process.

Coyotes travel in packs, but are very individually motivated when certain instincts chime in.

This is important when it comes to how to trap a coyote because if you catch the wrong one, your damage problems are going to continue.

Before ever setting the trap, do some studying and observing of the coyotes in your area. Most problem-causing coyotes are youthful males at the peak of their strength and ability. Because of their highly agile demeanor, these coyotes have enough confidence in their skill at getting away (mixed with a lack of control over their instincts) that they are more willing to take risks.

Once you’ve caught a coyote, look for tell-tale signs of livestock damage.

Check their teeth and paws for evidence of a killing. Check their fur for any signs of your property and your livestock.

Use a large quick-response trap

Some characteristics of the trap I always use, that I got from my grandpa:

Set the trap where there is evidence of disruption

Coyotes are prone to return to areas that have been fruitful for them in the past. Set your trap near the area where an incident has occurred. If you have any type of a livestock decoy that can assist the situation, set it up there.

Here is a video on trapping coyotes.

One place I really have found great is elevated areas. I like to place the trip off to the side of a ridge peak. Always in the direction I suspect they are moving in as it relates to where the incidents are occurring.

Here are the most frequent areas I’ve had success when working on how to trap a coyote:

Confuse the coyote and lure him in

Try to catch the coyote when he least expects it. I’ve found digging a hole and basing my trap setup around that is a great way to get them caught when they can’t wiggle their way out.

Decreased mobility is going to work in your favor. By trapping them partially in a hole or by placing some feed in a hole just beyond the trap, your odds of success will increase.

Here is a video on how to make a dirt hole set.

Also, note the decoy strategy here. The more factors you have working in your favor, the better. How to track a coyote boils down to outthinking him, and taking advantage of him where he is weak. Hills, food, and animals are three of those areas.

How to trap a coyote: What to avoid

Coyotes are smart animals, in addition to being incredibly fast and agile. As such, any type of cage trap isn’t likely to work. The animal will detect it from afar and steer clear of it entirely. Another thing to avoid is breaking the law. Depending on where you are located, there may be differing regulations and advisable procedures for setting, trapping, and handling a coyote.

Always check with your local wildlife department or animal control sector to find the best way to solve your problem.

Additionally, don’t set up your traps near dry brush.

Coyotes tend to stick away from these kind of areas as them make noise, startle them, and generally aren’t productive for them. The same goes for hay and other animal edibles that coyotes don’t like.

Do some research on what attracts coyotes in your area and incorporate those things into your strategy.

Trapping coyotes is tough, but by following these best practice your odds of getting rid of the nuisance will increase.

If you have to trap a few before getting the right one, so be it. After all, your livestock and income are at stake here.

If you have enjoyed this article, please give it a share on your social channels and do your part to increase awareness. Have a strategy that works in your specific neck of the woods? Check my recent post about the best gun safe for the money to storage your weapon of coyote hunting.