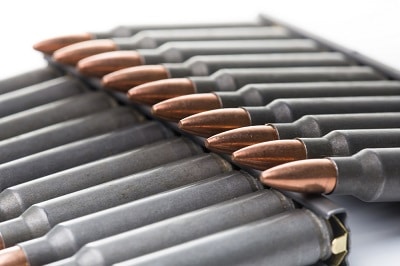 How To Store Ammo in the Right Way

All right, so you’ve just got yourself a firearm. Awesome! You get home with your new weapon and a box of ammo, excited for a trip to the range. But…. Shoot. How can you store the ammo?!

Not to worry! This is a pretty common question to people that are new to the firearm scene. As you will see, ammo is relatively durable, so you don’t have much to worry about.

In this article, we will go over some tips for storing ammo and make some general recommendations.

It’s really this simple. These are the extremely simple factors that you need to keep in mind when thinking about storing ammo.

If you are storing ammo, we are going to assume it is for the long-term. Most people don’t buy ammo to shoot it the very next day. Many people, like hunters and survivalists, will have a large quantity of ammunition stored up at any point in time.

So, therefore, we are going to assume that preserving your ammunition is in your plans as well.

First and foremost, your ammo should be stored in a cool environment. If it is stored in a place that is too hot, the excessive heat can negatively affect the gunpowder inside the bullet.

It will be a slow process, but high heat can affect the actual chemical composition of the gunpowder. This will negatively affect your ammunition and could make it unusable.

Next, your ammunition should be stored in a dry place. Water and moisture can rust the case and affect the propellant within the cartridge.

If the propellant is wet, it may burn slower, or not at all. This will degrade the effectiveness of the ammunition.

One thing to keep in mind with this, once your ammunition has been exposed to the outdoors, it is \ likely that it has experienced some moisture. This is multiplied if it was in a swampy area, or brought along on a rainy hunt. Any environment with high humidity has high moisture.

The ammo may also be stored in a secure spot, or under a lock and key. While not everyone will do this, it is a pretty common practice.

Another factor of the location is exactly what you are storing the ammo in. The cardboard boxes that ammo comes in aren’t meant to be a long term storage solution. These should be secured in a safe, or even better, in an ammo can.

Some people don’t like storing ammunition with the weapon. I don’t really have any issue with it, but it is something to keep in mind. I do store some ammunition in my gun safe, but not everyone likes to do this.

Following these extremely easy considerations will allow you to store your ammo effectively. Storing the ammo effectively will ensure that it lasts for a decade or more. For most people, this is a huge pro.

When in doubt, just think about the temperature, moisture, container, and location of the container. As long as you are thinking about these factors, you will have no issues.